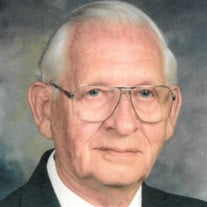 Benjamin Franklin Settle, 100, surrounded by his family, passed away peacefully at Frankfort Regional Medical Center on Monday, January 20, 2020. He was the widower of Joyce Knight Settle, sharing over 60 years of marriage until her death in 2012. Ben was born in Smiths Grove, Kentucky, on December 14, 1919, to the late Thomas B. and Lola (Hendricks) Settle. In addition to his wife and parents, he was preceded in death by his brother, Harry D. Settle, and his sister, Bessie (Neville) Giles. Ben spent most of his childhood, with his sister and brother, at the Methodist Children’s Home in Versailles. Soon after leaving the orphanage, he went to work for the Woodford Sun Newspaper, where he quickly learned newspaper production and became a skilled typesetter. During World War II, Ben relocated to Muskegon, Michigan, where he worked at Continental Aviation, learning to test airplane engines used for the war. When the war ended, he returned to Versailles, and with his brother-in-law, Neville Giles, opened his first business. “The Old Spinning Wheel” was a shop that specialized in making and refinishing furniture. Many pieces made in that shop are in his home today, including the bed he and Joyce used for over 60 years. Soon thereafter, he opened his first motel, Settle’s Motel, in Shelbyville. When he married Joyce in 1952, he sold the motel in Shelbyville and built Motel Frankfort on Louisville Road in Frankfort. In the 1960’s, Ben explored many other career opportunities. The most successful was B.F. Settle Sodding Company, which graded and sodded hundreds of yards in Central Kentucky. He also operated a Dairy Freeze and Frankfort’s only trampoline center. In 1968, he was a part owner and general manager of the Frankfort Ramada Inn Resort. Throughout the 1970’s he operated the Summit Oil Gas Station, located in front of Motel Frankfort, which he and Joyce also still operated. In 1978, Ben sold the motel and gas station and retired for the first time. During his retirement, he enjoyed training and showing champion rottweilers, winning many awards and championships. He also designed and constructed several apartment buildings and duplexes for himself and his two sons. When his younger son married, Ben oversaw the construction of their first home. He also enjoyed helping Joyce with her antique business by refinishing furniture and assisting her in any way he could. In 1999, at the age of 80, Ben came out of retirement and became a home builder. Settle Builders constructed 18 beautiful homes in the Heritage Subdivision. And just before he retired again at the age of 90, Ben built one last home for his older son. Ben was a success in business, but most of all, he was a loving and dedicated husband, father, and grandfather. He was a great storyteller and loved to talk about his love of Joyce and the achievements of his sons and grandsons. He was very proud of his family. He was a member of Graefenburg Baptist Church where he and Joyce enjoyed the fellowship of many good friends. He worked in the Sunday School office for many years and served as a trustee. Ben is survived by his two sons, Paul C. Settle and Dean L. Settle (Teresa), two grandsons, Neal Settle (Stacie) and Nicholas Settle, numerous nieces and nephews, and his loving caregivers, Annie Smith, Rachel Rome, and Brook Bowman. Services will be held at Harrod Brothers Funeral Home on Thursday, January 23, 2020, at 11:00 a.m. with Rev. Philip Meade and Rev. Terry Walters officiating. Burial will follow at Frankfort Cemetery. Visitation will be held at the funeral home on Wednesday, January 22, 2020, from 5:00 p.m. until 8:00 p.m. Serving as pallbearers will be Paul Settle, Dean Settle, Neal Settle, Nicholas Settle, Stuart Lines and David Blakeman. Honorary pallbearers will be Teresa (Shelly) Settle, Stacie Settle, Eleanor Blakeman, Annie Smith, Rachel Rome, and Brook Bowman. In lieu of flowers, please consider a donation to Graefenburg Baptist Church, 11288 Frankfort Road, Waddy, Kentucky 40076, or St. Jude Children’s Research Hospital, 262 Danny Thomas Place, Memphis, Tennessee 38105. Arrangements are under the direction of Harrod Brothers Funeral Home & Crematory.

Benjamin Franklin Settle, 100, surrounded by his family, passed away peacefully at Frankfort Regional Medical Center on Monday, January 20, 2020. He was the widower of Joyce Knight Settle, sharing over 60 years of marriage until her death in... View Obituary & Service Information

The family of Benjamin Franklin Settle created this Life Tributes page to make it easy to share your memories.