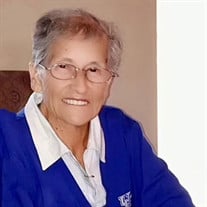 Frankfort – Betsy Hanna Disponett Childress, age 87, passed away Friday, September 17, 2021. Private services will be held. Ms. Betsy, as she was affectionately known, was born in Shelby County on August 23, 1934, to the late Horace Gilman and Janie Holt Disponett. Beginning most conversations with, “Did UK win?,” she much preferred Wildcat Blue to Cardinal Red. Boasting over a dozen Big Blue degrees among her progeny, her allegiance to the Cats began over seven decades ago at Versailles High School where, as a cheerleader and majorette, she was seated next to the guest speaker, UK Coach Paul “Bear” Bryant, at an end-of-season football banquet. As a retiree from the Kentucky state government labor cabinet, she would tirelessly encourage her children and grandchildren to “get a state job.” And, in retirement, as a devoted employee at Goodwill and a frequent face at McDonald’s, she would meet and greet the public as her extended family. She was the quintessential Kentuckian, loving fried chicken, country ham, green beans, the Derby Breakfast, and playing the lottery. Her sweet demeanor, gentle soul, and kind eyes were indicative of her character as a devoted mother, grandmother, and member of the Frankfort community. Betsy loved and accepted Jesus Christ as her Lord and Savior. She had been a faithful member of the Boone Plaza Church of Christ, and subsequently the Holly Hill Church of Christ. She represented acceptance and familiarity, much needed qualities in today’s ever-changing world, and as such, her presence will be sorely missed. She is survived by her children, Michael Childress (Anne), Kathy Cline (Joe), Tracy Childress (Saad Ehtisham), and Melissa Long (Charlie); siblings, Ronnie Disponett, Ella Tuttle, Patti Dempsey, and Mary Jo Ogden; grandchildren, Megan, Adam, Benjamin, Cameron, Jacob, Emma, Kacey, Hannah, Sammy, Hinah and Aliyah, and her fur babies. Serving as pallbearers will be her grandsons and sons-in-law. In lieu of flowers, expressions of sympathy may be made to the Franklin County Humane Society, https://www.fchsanimals.org/ Arrangements are under the direction of Harrod Brothers Funeral Home & Crematory.

The family of Betsy Childress created this Life Tributes page to make it easy to share your memories.