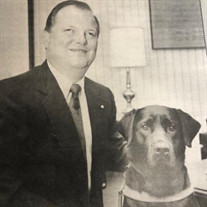 Frankfort – Judge Bob Arnold, born in Peaks Mill on October 20, 1947, passed away at home on Thursday, April 15, 2021, at 73 years of age. Known to many as Judge, Commissioner, Mr. Chairman, and often times simply Bob, Robert Lynn Arnold carried no title that he cherished more than Dad, Grandad, and Friend. Judge Arnold’s unwavering dedication to his community and family matched with his continued efforts aimed at bettering local governments, finally coupled with the countless amount of funds and resources he raised for charities have helped carry him into a unique class of philanthropic leaders. Former Franklin County Judge Executive Bob Arnold graduated from Franklin County High School in 1967, and the University of Kentucky in 1971, with a degree in Political Science & Special Education. He proudly served as the Charter President of the Theta Chi Fraternity and various roles in Student Government. Judge Arnold spent the 1970’s & 1980’s serving as the Campaign Coordinator for Wendell Ford and various roles in the Public Protection Cabinet, Governor’s Office, and Department of Agriculture. In 1989 Judge Arnold was elected Franklin County Judge Executive. During that campaign, his team adopted “A Commitment to Progress” as their motto and Bob was especially proud of the tremendous support he received from so many. He, his family, and his supporters knocked on every door in Franklin County, attended every bean supper imaginable. During his first year as County Judge, Bob Arnold and his team created The Franklin County Council on Family Abuse in 1990 to provide resources, shelter, and counseling to spouses, women, children, and elderly family members. To fund this project, Judge Arnold created a Golf Tournament, known as the Eli Scramble (named after one of his service dogs), which would go on to raise over $600,000 throughout its 20-year tenure. After sufficient funding was established for the Council on Family Abuse, the charity proceeds of the Eli Scramble were distributed to various charities including the Franklin County Senior Citizens Center, the Franklin County Humane Society, the Sunshine Center, PUSH (People Understating Special Handicaps), The Martin Luther King Jr. Center, Guiding Eyes for the Blind, and the Kentucky Special Olympics. Also in the early 1990s, Judge Arnold and the Franklin County Fiscal Court began discussions with the Carter Family about acquiring their family farm for a County Park. Although the community ramifications of the decisions were high, the Judge’s vision to provide Franklin County residents with a County Park was eminent. Up until his death, Judge Arnold loved to ride through the park any given Saturday morning and hear the happiness of the children and parents. Lakeview Park has become a staple for Franklin County Families and now includes: 5 Baseball/Softball Fields, 6 Soccer Fields, a Community Pavilion, Horse Show Arena/Amphitheatre, Walking/Jogging Track, Splash Pad, 9 Hole Par 3 Golf Course, Dog Park, Offices for the County Extension Agencies, the Carter House used for special events, and the Farm Bureau Pavilion. It’s also the home of the Franklin County Fair. After serving two terms as County Judge Executive, Judge Arnold conducted the swearing-in of Governor Paul Patton in a midnight service at the Governor’s Mansion and in 1995 was tapped to serve as Commissioner for the Department of Local Government. As Local Government Commissioner, he was responsible for administering more than $300 million in State & Federal funds to local communities where the appropriations were most needed. Judge Arnold was the initial chairman of the Kentucky Water Resource Development Commission, which laid the groundwork that provided hundreds of thousands of Kentuckians with clean and drinkable water. In October of 2000, Judge Arnold was hired as the Executive Director of the Kentucky Association of Counties. While at KACo, he was honored to serve as an advocate for County Governments and used his statewide network to revive the association's financial programs. Also while Executive Director, he and the KACo Staff designed and oversaw a new building project which is now a 50,000 sq foot building and serves as meeting space and office space for local government employees, elected officials, and subdivisions of County Governments. The KACo Building was the first Gold Lead Certified Building in the state at that time. Bob retired from public service in 2009. Judge Arnold was often labeled as a man with “Great Vision”. Ironically, Judge lost his eyesight as a young man due to a degenerative eye disease called retinitis pigmentosa. His vision reached beyond the normality of everyday life, exemplifying perseverance as his accomplishments were not bound by mere physical limitations. Bob is survived by his daughters, Tiphanie Taylor (Rick) and Sarah Chatley (Christian Anthony); Carla Arnold; sister, Cindy Smith (Wise); and grandchildren, Tre, Ty, Coen, and Parker. He was preceded in death by his parents, O.B. and Gladys Arnold; and by his loyal canine companions and guides, Vail, Colonel, Eli, Onyx, and Tucky. A Celebration of Life Service will be held at The Foundry on Broadway on Monday, April 19, 2021, at 1:00 p.m. with Rev. Tom Troth officiating. A gathering of family and friends will be held from 11:00 a.m. until 1:00 p.m. on Monday. The family would like to extend their gratitude to Tony Beaumont and Pam Carpenter for their compassionate care and friendship. In lieu of flowers, expressions of sympathy may be made to the Franklin County Humane Society. Arrangements are under the direction of Harrod Brothers Funeral Home & Crematory.

The family of Judge Bob Arnold created this Life Tributes page to make it easy to share your memories.