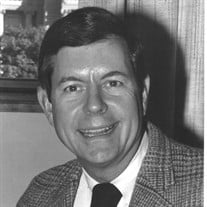 C. Gilmore Dutton, age 82, after receiving Last Rites from the Reverend Father Charles Howell, passed away on Wednesday, October 14, 2020. Mass of Christian Burial will be held at Good Shepherd Catholic Church on Wednesday, October 21, 2020 at 12:00 pm with the Reverend Father Howell officiating. Burial will follow at Frankfort Cemetery. The family will receive friends at Harrod Brothers Funeral Home for visitation from 9:00 am until 11:00 on Wednesday, October 21, 2020 prior to the Mass. Gilmore was a lifelong Frankfortian, highly respected in his field, a loving father, husband, grandfather, and great-grandfather. Gilmore was born on January 10, 1938, to J. Frank Dutton and Kathryn Tehan Dutton, who preceded him in death. He attended Good Shepherd Elementary and Good Shepherd High School, where he met most of his life-long friends. He was a standout basketball player at Good Shepherd and an all-around athlete. He graduated from Villa Madonna University in 1960 and attended graduate school at the University of New Mexico, where he enrolled to be close to the love of his life, RoseMarie Cordova. He worked for the New Mexico Department of Revenue. He and RoseMarie were married on December 26, 1960, and thereafter had 60 interesting years of marriage. Returning to Frankfort in 1964, Gilmore began a career with the Kentucky Department of Revenue. He accepted an appointment as Deputy Commissioner in 1969 to serve with his mentor and Commissioner of the Department of Revenue, James E. Luckett. In 1971, he joined the Legislative Research Commission, and thereafter served 21 years as staff administrator of the Appropriations and Revenue Committee. He was instrumental in multiple Legislative budgets and tax legislation. He authored numerous tax and revenue treatises and was highly respected for his knowledge and professionalism in the areas of appropriations, revenue, budgeting and taxes. In 1993, he took on the role as Chief of Staff for the Speaker of the House, Joe Clarke, and later returned to LRC until his retirement in 2008. For many years Gilmore ran a private tax preparation service. Gilmore was an avid outdoorsman, sportsman, and competitor. He won the City Championships in tennis, was an outstanding tournament bridge player, and won several bridge tournaments in Kentucky. He hunted elk in New Mexico, waterfowl in Canada, loved boating on the Kentucky River on his houseboat, and everything about Kentucky outdoors, hunting and fishing. During their childrearing years, there were many beloved family road trips mainly to New Mexico, Mexico, and Dauphin Island. Later, Gilmore and RoseMarie traveled throughout Europe, Australia and England. After retirement, Gilmore, joined RoseMarie in caring for her mother in Albuquerque. While there, Gilmore served as a Lector at San Felipe de Neri, a 400 year-old church in Old Town. They returned to Frankfort in 2015. Gilmore was an extremely involved and dedicated citizen. He served as a Chair of the Frankfort Jaycees during its influential years in the ‘60’s and through the ‘70’s. Gilmore ran for a seat on the Frankfort Independent School Board in 1978. He served with distinction on the School Board for 30 years, serving as Chairman for more than half of that time. His dedication to his Church and Catholicism was important to him. He was a Lector, Usher, and served as a member of the Good Shepherd Parish Counsel and on the School Council at various times. He and RoseMarie were instrumental in the expansion of Good Shepherd School to include a kindergarten. Gilmore held the deep conviction that education was the ultimate key to success. He touted these views both publicly and, most importantly, at home with his children. He was very proud of his children. Oldest son, Cyrus Gilmore Dutton, III, Esq., and wife, the Honorable Donna Dutton, reside in Shelbyville with their children, Cyrus (IV), Katherine, and Sarah; son, Paul Lawrence Dutton, resides in Danville, Pennsylvania, and has two daughters, Aimee and Amber; oldest daughter, Kathryn Dutton-Mitchell, Esq., resides in Frankfort with her husband Louis, and they have three children, Ali, Christian (deceased), and Caroline (Luca Giovine, fiancè); next oldest daughter, Julie Stewart, SLP, resides in Sarasota, Florida with her husband, Chris, and their children, Savannah and Lilly Mae; and youngest daughter, Casey Dutton-Triplett, MD, resides with husband, Colonel Henry Hall Triplett, III, in O’Fallon, Illinois, with their children, Henry Hall (IV), Annabella, and Ava. In addition, Gilmore is survived by 13 grandchildren and 3 great-grandchildren. Gilmore is also survived by his sister, Mary Jo Rogers (Larry) of Louisville, Kentucky. Serving as Honorary Pallbearers will be Dan Sweeney, Jim Noel, the Honorable C.M. “Hank” Hancock, Winston Rogers, Mike Benassi, Bill Johnson, and Guy “Bubba” Hart. Pallbearers will be Louis Mitchell, Cyrus Gilmore Dutton, IV, Henry Hall Triplett, IV, Chris Stewart, Luca Giovine, and Henry Hall (Tres) Triplett, III. In lieu of flowers, expressions of sympathy may be made to the Frankfort Independent Schools Education Foundation Inc. or Good Shepherd Catholic Church. Arrangements are under the direction of Harrod Brothers Funeral Home & Crematory.

The family of C. Gilmore Dutton created this Life Tributes page to make it easy to share your memories.

C. Gilmore Dutton, age 82, after receiving Last Rites from the...