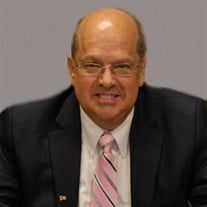 Frankfort – C. Michael Davenport, age 61, passed away Friday, February 21, 2020, in Indianapolis, Indiana. Services will be held at Capital City Christian Church on Friday, February 28, 2020, at 1:00 p.m. with Pastor Andy Lawrence officiating. Burial will follow at Frankfort Cemetery. The family will receive friends at Capital City Christian Church from 5:00 p.m. until 8:00 p.m. on Thursday, February 27, 2020. Born November 21, 1958, C. Michael Davenport, President/CEO of C. Michael Davenport Inc. and Davenport Broadcasting’s WKYL 102.1 FM, was a lifelong resident of Frankfort and graduate of Franklin County High School, graduating at the age of sixteen. His high ambitions and strong work ethic pushed him to complete electronics vocational school in two years and to obtain a license to sell real estate at age eighteen. While working with GTE for 17 years, Mike also began a career as a builder, developer and real estate broker. He retired from GTE in 1993 to pursue his other career fulltime. He continued his education by learning another trade, auctioneering, through the Missouri Auction School. He utilized these skills solely for charitable events. As a builder and developer, he contributed to Frankfort’s needs with projects such as: a subdivision called “Bittersweet Farms,” numerous homes apartments, town homes, and offices. He constructed a 52,000 square foot speculative industrial building for the creation of jobs in the Frankfort community. He renovated a building on Capitol Avenue in a one-week time frame to be a beautiful showcase for the Governor’s inaugural parade. Mike saved the historic railroad depot in Lawrenceburg, Kentucky from demolition by purchasing it from the railroad and relocating it. He then donated the depot to Anderson County Fiscal Court. It is now used as a beautiful Farmer’s Market on Highway 127 in Lawrenceburg. He developed Prevention Park, a beautiful professional office development. Additionally, Mike constructed a road through Prevention Park that was desperately wanted and needed by the community to link many people to the vital services, such as schools and hospital. Mike’s other accomplishments include being a founding board member of L.I.F.E House for Animals, a board member of First Federal Savings Bank, Kentucky Historical Society, Franklin County Humane Society, Kentucky Youth Association – State YMCA, and advisory board member of Republic Bank. He was the Past President of Frankfort Area Chamber of Commerce, Director of National Association of Home Builders, President and current member of Home Builders Association of Frankfort, and Vice President of Home Builders Association of Kentucky. His career was not only built on his accomplishments of development, but his community service, being awarded the Paul Sullivan Community Service Award in 1993, Small Business of the Year award in 1997, Guinness World Record for “World Largest Piggybank” construction in 2003, as a fundraiser for L.I.F.E House for Animals, and even NAACP Frankfort Chapter Man of the Year Award in 2014. The most special project in Mike’s life was the construction of the former PUSH (People Understanding Special Handicaps) School. Mike also assisted in the construction of a no-euthanasia adoption facility, L.I.F.E House for Animals. Mike relied upon his vision, creativity, and general “gut feeling” of what the Frankfort community needed to drive his projects. Most of what he built was speculative. He developed land and constructed buildings with uniqueness in design and attention to preserving the natural surrounding area. Whether it be a matter of saving trees or creating picnic areas, the impact of all of these things made Mike’s developments blend in with the community. Mike counted his blessings every day and strived for quality of life in each and every project and gave all the credit to God. Mike’s greatest blessings were his family. He is survived by his wife of 23 years, Kimberly Davenport; children, Chamberlin Jackson Davenport and Chandler Turner Davenport; mother, Margaret Ann Green Hockensmith; siblings, Mark Hockensmith (Kristi) and Brian Hockensmith; nephews, Brady, Carson, and Alex Hockensmith and Tyler Olson, step-father, Roy Hockensmith, step-mother, Sharon Davenport, and step-sister, Missy Farmer. He was also blessed with many beloved aunts, uncles and cousins. He was preceded in death by his father, Charles Daniel Davenport. Mike attended The Point Community Church, and lived a life surrounded and founded on God. His humbleness and generosity will live on through his two children. Mike’s love for God, our country, and our flag is evident in his placement of an 1800 square foot American Flag and 600 square foot Christian Flag atop a flagpole visible alongside Interstate 64, in his development named, “The Chandler” developed by he and his son, Chamberlin. Mike mostly enjoyed time spent with his family, where they especially loved traveling together. Disney World will be remembered fondly by his wife and children, and they will continue to live by Mike’s favorite Walt Disney quote, “If you can dream it, do it.” Mike’s great love for his family, friends, and community will be forever unparalleled and greatly missed. Serving as pallbearers will be Lisa Allen, Wendell Butler, Frank Shelton, Allen Sweeney, Steve Johnson, Michael D. Haynes, Jonathan Vaught, and John Lee. In lieu of flowers, expressions of sympathy may be made to The Point Community Church and L.I.F.E House for Animals. Arrangements are under the direction of Harrod Brothers Funeral Home & Crematory.

The family of C. Michael Davenport created this Life Tributes page to make it easy to share your memories.