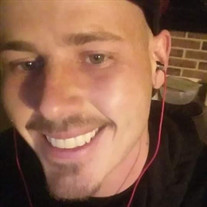 Frankfort – Charles “Scooter” Raymond McKeehan, Jr., age 31, passed away on Friday, October 16, 2020. Services will be held at Harrod Brothers Funeral Home on Friday, October 23, 2020, at 1:30 p.m. with Rev. Todd Lester officiating. Entombment will follow at Sunset Memorial Gardens. Visitation will be held at Harrod Brothers Funeral Home from 11:30 a.m. until 1:30 p.m. service time on Friday. Lovingly known as “Scooter,” he was born in Versailles, Kentucky, on June 22, 1989. He worked in the food industry as a chef at Chili’s, but especially loved making gourmet meals at home for his family and friends. As a true outdoorsman, he loved time spent outside, whether camping, hunting, or four-wheeling. He is survived by his parents, Charles “Chuck” McKeehan, Sr. (Jenifer) and Brenda Lynn Maroney Stewart; beloved children, Charles Raymond McKeehan, III, Zachary Lee McKeehan, and Auburn Jolene McKeehan; sister, Emily Ann McKeehan, grandparents, Henry and Linda Maroney, Mary Campbell, and Mary Broughton; and by his great-grandmother, Gladys Brumback. He was also blessed with several nieces and nephews, as well as a host of extended family members and friends. Serving as pallbearers will be family and friends. In lieu of flowers, expressions of sympathy may be made to Forks of Elkhorn Baptist Church or a charity of one’s choice. Arrangements are under the direction of Harrod Brothers Funeral Home & Crematory.

The family of Charles "Scooter" Raymond McKeehan Jr. created this Life Tributes page to make it easy to share your memories.