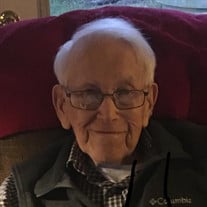 Chester Bojanowski, 93, passed away at home Saturday, August 3, 2019. Services for Mr. Bojanowski will be held at Harrod Brothers Funeral Home on Saturday, August 10, 2019, at 2:00 p.m. with Rev. Dr. John Opsata officiating. The family will receive friends at Harrod Brothers Funeral Home Saturday, August 10, 2019, from 12:00 p.m. until the service at 2:00 p.m. Committal services will be held at Walnut Hill Cemetery, Leitchfield, KY on Sunday, August 11, 2019, at 3:00 p.m. CST. Mr. Bojanowski was born June 13, 1926, in Hartford, Connecticut to the late Stanley and Sophie Kasica Bojanowski. He was a proud WWII veteran of the Army of the United States. He held a geology degree from the University of Connecticut. He retired from the federal government after 30 years of service as a cartographer for the Geological Survey. Following his retirement, he began a new career in the Cabinet for Natural Resources, Kentucky State Government. Chester was united in marriage for 63 years to his beloved wife Mary Helen who passed away in August 2014. Together they traveled the world exploring Europe, Southeast Asia, Australia and New Zealand. At home he enjoyed vegetable gardening and being a “handy man.” He was a member of First Christian Church. He was a loving father and grandfather to his son, Jeffrey Bojanowski (Cathy) of Lexington; and grandchildren, Dr. Matthew Bojanowski (Cherly Sanchez), Miami, FL and Anne Bojanowski, Brooklyn, NY. In addition to his wife and parents, he was preceded in death by two sons, Thomas Franklin Bojanowski and Jonathan Keith Bojanowski; and three sisters. Arrangements are under the direction of Harrod Brothers Funeral Home.

The family of Chester Bojanowski created this Life Tributes page to make it easy to share your memories.