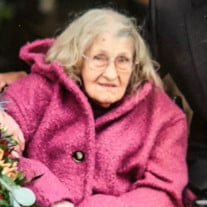 Frankfort-Delma Brown Hoover passed away on Saturday, December 26, 2020, of natural causes. Delma was born in Whitesburg, Kentucky to the late Jim and Martha Elizabeth (Lizzie) Brown. She graduated from Whitesburg High School where she played on the basketball and volleyball teams. She followed her siblings to Charlestown, West Virginia where she began her work career in the local drug store as a Pharmacy clerk. She later moved to Frankfort, Kentucky where she took care of her sister’s five children while she recovered from an illness and surgery. Her first job was as a ticket taker at the Grand Theater in downtown Frankfort. She then began a 30-year career at Southern Moldings, formerly HK Porter, as a welder and press operator. She retired in 1990. She and her husband enjoyed porch sitting, driving in the country, and playing with their grandchildren. She is a member of St. John Baptist Church in Bald Knob where she enjoyed working in the kitchen during VBS. Mrs. Hoover is survived by her daughter Nancy Hamilton; grandchildren Kate Hamilton and great granddaughter Teagan Rein; granddaughter Alison Hamilton Gortney (Gabe) and children Maddax and Gannon Gortney; grandson Garrett Hamilton, daughter Liz Norris, sister-in-law Betty Brown and brother-in-law Jim Davis. She leaves behind several nieces and nephews. In addition to her parents, she was preceded in death by her husband, Hubert; an infant sister, Maime; her siblings Ann (Rufus) Taylor, Marie (Morgan) Hays, Herman Brown, Virgil (Anne) Brown, Alma (Dave) Hollan, her son-in-law Alan Hamilton and her nephew Doyle Devers. Serving as pallbearers are Garrett Hamilton, Gabe Gortney, David Alan Devers, Lee Weber, Earl Weber and Chuck Doane. Flowers are welcome or expressions of sympathy may be sent to Bluegrass Care Navigators, Franklin County. Arrangements are under the direction of Harrod Brothers Funeral Home and Crematory.

Frankfort-Delma Brown Hoover passed away on Saturday, December 26, 2020, of natural causes. Delma was born in Whitesburg, Kentucky to the late Jim and Martha Elizabeth (Lizzie) Brown. She graduated from Whitesburg High School where she played... View Obituary & Service Information

The family of Delma Hoover created this Life Tributes page to make it easy to share your memories.