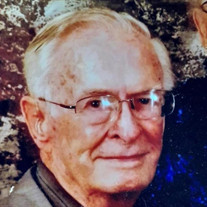 Garnett Hulette was born in his beloved Bald Knob hills in Franklin County on January 11, 1926 and passed away on October 7, 2020. When he was a teen at Bald Knob High School, Garnett joined the Navy and fought in the Pacific Theater during World War II, serving as cook on a small troop carrier for the duration of the war. He always said he won his freedom on July 4, 1946 and then lost it again 15 days later on July 19 when he married Dorothy Louise Thurman. This year, they were married for 74 years. Together they had three children, Douglas Scott Hulette (deceased), Lesa Hulette Scott (John R.) and Mark Garnett Hulette (Marty). Family meant so much to him. As the grandchildren came along, he would always find ways to get together, even helping Dorothy cook Sunday meals after church so they could all visit. He was so proud of his grandchildren… Jonathan (Kim) and Joshua (Raye) Scott, Alex, Sawyer, and Tucker Hulette. He is also survived by six great-grandchildren. He was one of 6 boys born to Justus and Eva Allison Hulette. Brothers who pre-deceased him are Bomar, Lyman, and Norris Hulette. His two living brothers are Cecil Hulette, Frankfort, and James Stuart Hulette, Louisville. Garnett was a long-time member of Buck Run Baptist Church. He served as a deacon, Sunday School teacher, and choir member. He was actively involved in the committees, missions, and outreach of the church. He believed that copies of the Bible should be available to all and served for decades as a member of Gideons International. As a Gideon, he spent many hours standing outside businesses, schools, and state office buildings handing out copies of God’s Word. Garnett was a fixture in the automobile business in Frankfort for more than 40 years. His first new car dealership was Studebaker, followed by Frankfort Chrysler, Plymouth, Dodge. He always used his businesses to help others. He gave many young men their first job by hiring them to wash cars, teaching them to work hard and take pride in their job. He also wanted to make sure no one was hungry so he would loan new Dodge pick-up trucks to collect donated food for the needy in the Frankfort community. Later he would help establish the Frankfort Food Pantry and serve on the Board of Directors. Garnett believed in the service projects that the Kiwanis Club sponsored in our community. He served as President of the Downtown Kiwanis Club, and was proud of accumulating more than 50 years of perfect attendance as he served the community and involved others in helping. He was a life-long UK Cat fan and wanted to see the basketball guys win another title every year! Services were held on Friday, October 9, 2020, at Pleasant Ridge Baptist Church Cemetery with Dr. Hershael York and Rev. Dave Parks officiating and Music provided by Cloyd Stratton and Gene and Joanna Wright. The family wishes to express sincere appreciation to Bluegrass Care Navigators (Hospice) and The Lantern staff for their compassionate care during the last months of his life. Donations are encouraged to Gideons International and the Buck Run Baptist Church Building Fund. Arrangements are under the direction of Harrod Brothers Funeral Home & Crematory.

Garnett Hulette was born in his beloved Bald Knob hills in Franklin County on January 11, 1926 and passed away on October 7, 2020. When he was a teen at Bald Knob High School, Garnett joined the Navy and fought in the Pacific Theater during... View Obituary & Service Information

The family of Garnett O. Hulette created this Life Tributes page to make it easy to share your memories.

Garnett Hulette was born in his beloved Bald Knob hills in Franklin...