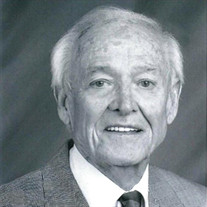 Frankfort - Harold Gene Mays was born February 26, 1935, in Heidrick, Kentucky, the only child of Ralph and Allie Mays. He passed away on April 29, 2022, in Lexington Kentucky. He was united in marriage with Margie Coleman Mays on February 28, 1963, she precedes him in death. Harold was a graduate of Barbourville High School and the University of Kentucky where he earned a BS and MS in Civil Engineering. He began work with the Kentucky Department of Highways in 1960, and shortly thereafter transferred to the Division of Materials where in 1964 he was named Director of Materials at the age of only 28. In 1969, Harold accepted the position of Executive Director of the Kentucky Crushed Stone Association. In 1971, Harold joined the firms of Harrod-Carter, a crushed stone ready-mix concrete producer, and the Robert L. Carter Company, a hot-mix asphalt producer and highway contractor. He worked as an engineer for both companies, but over a period of time his efforts were directed solely to the Robert L. Carter Company, which he purchased in 1984 and later changed the name to the H. G. Mays Corporation. Harold was passionate about the highway industry and served as an active leader in industry associations including as Chairman of Kentucky Association of Highway Contractors, Chairman of Kentucky Crushed Stone Association, and President of Plantmix Asphalt Industry of Kentucky. In 2000 Harold received the University of Kentucky Civil Engineering Lifetime Achievement Award, and in 2018 was inducted into the Kentucky Transportation Hall of Fame. Harold was an avid sports fan, especially UK basketball, a beloved father and grandfather, and a devoted family man who loved and protected his family fiercely. Harold leaves to mourn his passing his children, Micki, and Kris (Jennifer), and his 6 grandchildren, Klay, Logan, Allie, Owen, Sam, and Matthew, as well as many other cherished friends and family. Visitation will be held at Harrod Brothers Funeral Home from 4:00 p.m. until 8:00 p.m. on Thursday, May 5, 2022. Private graveside services will be observed with Rev. Mike Colston officiating. Serving as pallbearers will be Logan Mays, Albert Kinman, Klay Kinman, Tony McGlone, Charles Whelan, and David Harrod. Flowers are welcome and expressions of sympathy may be made to the Local United Way or the Franklin County Humane Society. Arrangements are under the direction of Harrod Brothers Funeral Home & Crematory.

Frankfort - Harold Gene Mays was born February 26, 1935, in Heidrick, Kentucky, the only child of Ralph and Allie Mays. He passed away on April 29, 2022, in Lexington Kentucky. He was united in marriage with Margie Coleman Mays on February... View Obituary & Service Information

The family of Harold Gene Mays created this Life Tributes page to make it easy to share your memories.