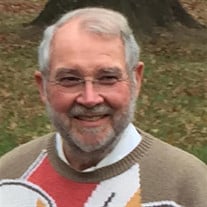 Frankfort – John Paul “Papa” Broderson was born October 18, 1941, in Franklin, Simpson County, Kentucky. He was a graduate of Franklin Simpson High School, the University of Kentucky, and the University of Kentucky School of Medicine. He completed his internship in Minneapolis, and his residency at the University of Illinois in Chicago, spending time in Calcutta, India working with the cataract camps. Following his training, he moved to Frankfort where he practiced Ophthalmology for 35 years retiring in 2006 at which time he began his life’s passion for service. John Paul was preceded in death by his parents, Henry and Lucy Mae Robertson Broderson, brother, Joe Broderson, brother, Lee Broderson, and nieces, Beth Broderson and Lisa Mitchell. He is survived by his wife and soul mate, Marcey Broderson, sons, John Paul Broderson, Jr., Kelly Glenn Broderson (Angie), and Brian Todd Garland; daughters, Julie Garland Stevenson and Beth Garland McDonald (Mike), grandchildren, Emma Grace Stevenson, Joseph John Broderson, Jacob James Broderson, Daniel Jackson McDonald, Benjamin Whalen McDonald, and Margaret Laurel McDonald. He is also survived by his brother, Alvin Benton Broderson (Ann), sister-in-law, Barbara, sister-in-law, Jenny Mitchell (Rodney), as well as many nieces and nephews. Papa’s life was devoted to service, not only to his family but in his daily service to the Least of the Brethren. He has served as a member of the Drug Court Board, assisting participants in their journey to a better life, served on the Salvation Army Board, taught life skills classes at the Franklin County Regional Jail, was active in the Interfaith Council in Frankfort, lead the Men’s Sunday School Class at the First United Methodist Church, and was a member of the Thursday Morning Men’s group at Cracker Barrel. He was a devoted servant to everyone he met – a most generous and compassionate man – showing love and respect to everyone with no thought of religion, color, or social status. One of the Saints he admired was Mother Teresa who said, “A life not lived for others is not a life.” This life for others was the way he lived. Services will be held at First United Methodist Church on Monday, October 29, 2018, at 12:30 p.m. with Dr. Phil Hill officiating, Dr. Jackson Brewer, and Rev. Tonya Kenner officiating. Burial will follow at Frankfort Cemetery. The family will receive friends from 3:00 p.m. until 6:00 p.m. Sunday, October 28, 2018, at the Church. In lieu of flowers, the family asks expressions of sympathy be made to First United Methodist Church Frankfort Least of the Brethren Fund. Arrangements are under the direction of Harrod Brothers Funeral Home.

The family of John Paul Broderson created this Life Tributes page to make it easy to share your memories.