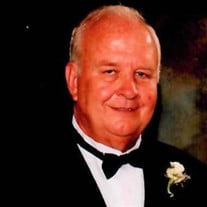 Frankfort – John Claude Duvall, age 82, passed away at home on Wednesday, June 23, 2021. Services will be held at Harrod Brothers Funeral Home on Monday, June 28, 2021, at 10:00 a.m. with Richard Mardis officiating. Burial will follow at Sunset Memorial Gardens. The family will receive friends at Harrod Brothers Funeral Home from 2:00 p.m. until 5:00 p.m. on Sunday, June 27, 2021. John was born in Frankfort on December 21, 1938, to the late William Samuel Duvall and May Reese Duvall. The epitome of love and security, John rarely came home without sweat and dirt-stained clothes. He was first and foremost a fireman, but that allowed him to be a carpenter, plumber, and farmer. John was a hard-working and devoted man willing to do whatever necessary to provide for his family. He retired from the City of Frankfort Fire Department after serving many years as a firefighter and Battalion Chief. In addition, he was a devoted member of Myrtle Avenue Church of Christ. John wasn’t only special to his family. He had an unforgettable and bigger-than-life spirit that made friends with most everyone he met. John’s smile and laugh were certainly contagious. He enjoyed time spent solving the world’s biggest problems at McDonald’s, Hardee’s, and Wrights Grocery. John was the most loveable person, especially with animals and children. He adored his daughters, grandchildren, and several special dogs and cats…and the horse, bull, and that goose. Most of all, John left his family feeling proud to be his. He was a staple of love, strength, and light-heartedness that will forever live within them. John is survived by his beloved wife of 60 and a half years, Sondra Hammons Duvall; his daughters, Teresa Hayes (Richard) and Lisa Cox (Mark); sister, Barbara Capsel; grandchildren, John Hayes, Joel Hayes (Grace), and Reese Cox; and by his great-grandchildren, Eliza and Ben Hayes. He was also blessed with many wonderful nieces, nephews, and friends. In addition to his parents, he was preceded in death by his siblings, Ann Mary Crowe, Tom Duvall, and Agnes Underwood. Serving as pallbearers will be the City of Frankfort Fire Department Honor Guard. In lieu of flowers, expressions of sympathy may be made to Supporting Heroes, www.supportingheroes.com Arrangements are under the direction of Harrod Brothers Funeral Home & Crematory.

The family of John C. Duvall created this Life Tributes page to make it easy to share your memories.

Frankfort – John Claude Duvall, age 82, passed away at home on...