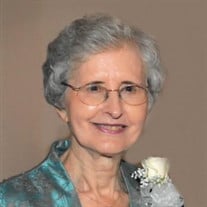 Mrs. Pauline Bridger, 85, was called home to be with her Lord Jesus on May 18, 2020 in Lexington, KY at the Willows at Hamburg. Mable, as her family called her, was born in Beech Bluff, TN on February 12, 1935 to the late Clarence M. Alexander and Vonnell (Barnes) Alexander. Mrs. Bridger was a dedicated and conscientious teacher throughout her life and used her talents for her Lord in shaping many young lives through Sunday School and Vacation Bible School. She provided decades of service as an Assistant Professor of Nursing at Union University in Jackson, TN. She held a Bachelor of Science in nursing from the University of Tennessee at Memphis and a Masters of Education from the University of Memphis. For her exemplary service and contributions to the nursing profession, she was recognized with many awards. She epitomized the service she trained her students for. In 1993, Mrs. Bridger was named Union University’s first Georgia Wilson Distinguished Professor. This professorship recognizes the close association of Jackson-Madison County General Hospital in the founding of Union’s School of Nursing while Georgia Wilson served as director of nursing for the hospital. Mrs. Bridger was a member of the Free Grace Bible Church in Frankfort, KY and a former member of Victory Free Will Baptist Church in Jackson, TN. She was preceded in death by her husband, Walter O. Bridger, a step-son, Alan Bridger and a brother, James David Alexander. Mrs. Bridger leaves behind a son, Richard Dobson (Barbara) of Frankfort, KY, a daughter, Cheryl Alonzo (Juan) of Mesquite, TX and a step-daughter, Barbara Jean (Pat) of Raleigh, North Carolina. She is survived by her sister and brother-in-law, Linda and Jim Pack of Brentwood, TN. She also leaves a legacy of eleven grandchildren and seventeen great-grandchildren. A graveside service will be held at Hollywood Cemetery in Jackson, TN at 10:00 a.m. Friday, May 22 with Dr. Lee Wiggins delivering the message. In lieu of flowers, contributions may be made to the Pauline Bridger Nursing Scholarship Fund at Union University in Jackson. Arrangements are under the direction of Harrod Brothers Funeral Home & Crematory.

Mrs. Pauline Bridger, 85, was called home to be with her Lord Jesus on May 18, 2020 in Lexington, KY at the Willows at Hamburg. Mable, as her family called her, was born in Beech Bluff, TN on February 12, 1935 to the late Clarence M. Alexander... View Obituary & Service Information

The family of Mable Pauline Bridger created this Life Tributes page to make it easy to share your memories.

Mrs. Pauline Bridger, 85, was called home to be with her Lord...