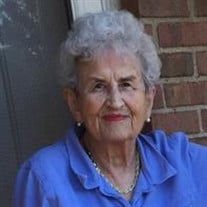 Margaret Yager Clark, beloved wife, loving mom, talented cook and gracious hostess passed away peacefully on July 22, 2020 in Lakewood Ranch, Florida at 94 years of age. Margaret was born March 7, 1926 to Julian Sneed Yager and Helen Yager in Frankfort, Kentucky. Margaret met her husband, Andrew (Andy) Harrison Clark at the University of Kentucky and they were married in Frankfort in 1949. Margaret was an involved member of the sorority Kappa Kappa Gamma while attending college and for years after. Margaret was an active member of the communities she and her family lived in from Cincinnati, Ohio to Long Meadow Massachusetts, Ellicott City, Maryland, and finally returning to her Kentucky roots when she and Andy returned to Louisville in 1979. Described as a “social butterfly” by her many friends, Margaret was a member of many social and civic clubs and was an active volunteer and counselor for breast cancer survivors. Margaret led lively parties and gatherings at her home for her friends and family and enjoyed many hobbies including golf, bridge, walking, the arts and her endless love of travel. Together with Andy, they traveled the world visiting 34 countries, and nearly every US state (sorry North Dakota). Their travels together included Friendship Force, Elderhostel, and family and friends. Through her church memberships from College Hill Presbyterian to Christ Church United Methodist, Margaret volunteered and sang alongside her husband Andy in the choir. Both she and Andy were Christians who lived their lives embracing community and the values of their faith. Margaret is survived by her daughter, Julie Clark-Jones, her son David Andrew Clark and their respective spouses and a loving family of six grandchildren, three great grandchildren, and her sister, Middie Lou Thompson. Margaret is preceded in death by her husband Andy, her parents Julian and Helen Yager, and her sister Julie Wheat. Margaret will be buried alongside her husband Andy in Frankfort Kentucky and services will be held at a later date given current Covid 19 concerns. Arrangements are under the direction of Harrod Brothers Funeral Home & Crematory.

The family of Margaret Yager Clark created this Life Tributes page to make it easy to share your memories.