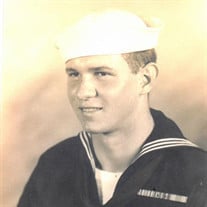 Noel Biggs, age 95, passed away Saturday, June 6, 2020. A celebration of life will be held at Harrod Brothers Funeral Home at a later date. Interment will be at Camp Nelson National Cemetery. Noel, and his older twin brother, Frederick, were born on Christmas Day, 1924, in Henderson, Kentucky. Noel was an inquisitive child who liked to take things apart to see how they worked, including his mother’s mantel clock and the engine of his father’s 1930 Buick; however, they both worked better after he put them back together. When he started school, he tried to write left-handed, but his teacher discouraged him with frequent and heavy-handed use of a ruler. He became ambidextrous, able to work and write with both hands. Noel excelled at math and history. He had a life-long love of learning and would read as many books and manuals as he could on a subject, teaching himself many skills, including wiring of electrical circuits, basic plumbing and carpentry. He never met an engine he could not repair or a structure he could not build. Growing up by the Green River, he and his friends learned to swim, dive and pilot fishing boats, as well as his father’s ferry boat at a young age. Following Pearl Harbor and days prior to his 18th birthday, Noel and his brother enlisted in the U.S. Navy. Entering as an Apprentice Seaman, he eventually attained the official rank of Gunner’s Mate 3rd Class. Noel was trained as a “frogman” and was a member of the Navy’s Underwater Demolitions Team. He saw action in Europe, Africa and the Philippine Islands, serving aboard the USS John Hopkins, USS Eric V. Hauser, USS Brontes, and the USS Ernest G. Small. While serving in the South Pacific, he was part of the team sent to rescue a downed fighter pilot taken captive by an island’s native cannibals. When his ship arrived off the coast of Naples in 1943, too many were moored in the harbor, so Noel’s ship dropped anchor just outside. Ships burned smoke pots to obscure their position. Despite their attempts at camouflage, the German Luftwaffe found their target and Noel was injured by flying shrapnel. The hospital in Naples where he was taken for treatment was also hit, losing the roof and a portion of a wall of the wing Noel was admitted to. Noel and other patients watched the bombers continue through the city until staff came to remove them from the rubble. His awards include the Philippine Liberation Ribbon, Victory Medal and Good Conduct Medal. After he returned from the war, Noel worked a variety of jobs, including the construction of power lines through Central and Eastern Kentucky. Whenever he drove Versailles Road and saw the power lines attached to large metal towers crossing the road, he would smile and say “there’s my towers”. Noel attended the Hobart Welding School in Ohio, graduating first in his class with the ability to use any type of welder, both on land and underwater. He worked at Alcoa Aluminum Warwick Works in Indiana for over 25 years as a Master Mechanic, Welder and teacher of Apprenticeship classes. After retiring, he moved to Frankfort and grew bored. In his 80’s he came out of retirement to work part-time at Kroger West as a bagger. He would tell people “my name is Noel, that’s Leon spelled backwards”. Customers knew Noel by his smile, kind demeanor and habit of tying a half hitch in the plastic bags so the groceries wouldn’t spill out in the car. In 1950, Noel and Frederick had blind dates with two sisters. Noel came to escort Dorothy and Frederick to escort Irene. By the end of the evening, neither sister really liked Frederick and Noel had taken a shine to Irene. Noel started coming around to visit “the family” until he got Irene to go out on a date. Noel and Irene took long rides through the country on his Harley Davidson. Noel’s kind and easygoing personality and sense of humor won Irene over and they married in 1953. Noel was baptized at an early age and studied his Bible every day. He was active in the Masonic Lodge in both Henderson and Morganfield and served as Grand Master. A member of First Baptist Church of Frankfort (at the Singing Bridge), Noel was known by all as “The Candy Man”. Noel would circulate through the congregation before church, greeting people carrying one of his many ornate baskets filled with peppermints, spearmint and butterscotch. Noel was kind and easy-going, with a great sense of humor. He loved to tell jokes and play little tricks on family and friends. He adored children and would often join in their games. Teaching his young daughter to read, he would said “if you can read, books can talk to you – they can teach you things and take you to wild and wonderful places.” He would be the first to volunteer when a helping hand was needed. He loved God, his family, his country, bluegrass music and bagpipes. Noel will be remembered for the kindness he so willingly shared with others and for the boundless love he gave his family. He is survived by his wife, Irene Crawford Biggs; daughter, Tamela A. Biggs; and nieces, Kay O’Bryan, Jane Johnson and Gail Haire. He was also blessed with great-nieces and nephews. He was preceded in death by his parents, Lewis Noel and Emma Rich Whitledge Biggs; brother Frederick Biggs; and half-brother, Emil Whitledge. In lieu of flowers, expressions of sympathy may be made to the Alzheimer’s Association. Arrangements are under the direction of Harrod Brothers Funeral Home & Crematory.

Noel Biggs, age 95, passed away Saturday, June 6, 2020. A celebration of life will be held at Harrod Brothers Funeral Home at a later date. Interment will be at Camp Nelson National Cemetery. Noel, and his older twin brother, Frederick, were... View Obituary & Service Information

The family of Noel Biggs created this Life Tributes page to make it easy to share your memories.