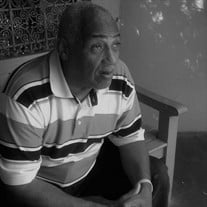 Richard Oliver Bartholomew, age 77, passed away Friday, November 8, 2019, in Lexington. Services will be held at Harrod Brothers Funeral Home on Saturday, November 16 2019, at 1:00pm with Rev. Dr. John Opsata officiating, assisted by Rev. Dawn Montgomery. The family will receive friends at Harrod Brother Funeral Home from 12:00 pm until 1:00pm service time on Saturday. Richard was born on December 6, 1941 in Manhattan, New York. Raised in Brooklyn, he attended Boys High School and later on became an electrician, earning two Master Licenses and heading several projects domestically and internationally. He was an avid reader and seeker of knowledge, capable of engaging in conversation with anyone he met. He is survived by his children, Tina, Pierre, Damon, Corey, Zerlina, and Marcus; his wife, Maria (née Hairston); his siblings, Tangy, Peter, André, Bryan, and Julie; his former wife, Dorothy; his mother, Louise; and a host of cousins and grandchildren. He is preceded in death by his father, Oliver Bartholomew; his son, Brent and daughter, Jesslyn. In lieu of flowers, expressions of sympathy may be made to First Christian Church Mission Team Fund. Arrangements are under the direction of Harrod Brothers Funeral Home.

The family of Richard O. Bartholomew created this Life Tributes page to make it easy to share your memories.