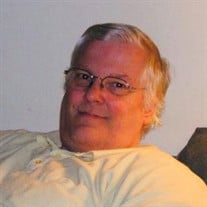 Robert “Bob” C. Mania, Jr., age 67, passed away Saturday, August 10, 2019. Memorial services for Dr. Mania will be held at Harrod Brothers Funeral Home on Wednesday, August 14, 2019, at 2:00 p.m. with Rev. David Smith officiating. The family will receive friends at Harrod Brothers Funeral Home Wednesday, August 14, 2019, from 12:00 p.m. until the service at 2:00 p.m. Dr Mania was born in Mt. Clemens, Michigan and was the son of the late Patricia (Jobse) Mania and Robert C. Mania, Sr. He was a graduate of St. Louis High School, Mt. Clemens, Michigan and received a B.S. in Physics at Michigan Tech, M.S. in Physics (Nuclear) at Michigan Tech and a Ph.D. in Physics (Electrochemistry and Fluids) at Virginia Tech. Bob was a physics professor at Kentucky State University for thirty-three years, teaching a variety of math and science related courses. He also taught at Alice Lloyd College and Midway University. His other work experience included stints at the US Naval Research Laboratory, the US Army Engineering Directorate, the US Air Force Nuclear Research Laboratory at Brooks Air Force Base, and the Materials Science Department at the University of Kentucky. He also received science education grants from NASA and the National Science Foundation and served on the Advising Council for the Commonwealth of Kentucky Space Grant Consortium. However, he loved to teach and his favorite part of his job was always working with and mentoring his students. Bob enjoyed nature, often going out with his wife to photograph animals and plants. They even wrote and published two nature books together that included some of their photos: A Forest’s Life and Woodpecker in the Backyard. Bob loved listening to music, talking about history, reading-especially science fiction and fantasy, and playing video games in his spare time. But most of all he loved spending time with his family and could often be seen petting one of his cats. He is survived by his wife, Cathy Gayheart Mania; children, Tracey Mania and Robert Alan Mania; brothers, Daniel Mania, James Mania, Joseph Mania and Fred Bantle. Also surviving are his beloved in-laws, Linda and Danny Smith, Sharon and Tommy Hall, Keith and Sherry Gayheart; nieces and nephews, Jordan Hall, Keisha Miller, Denise Cupps, Shayla Overturf, Shannon Gunnels, Ashley Mania, Eric Mania and Brian Mania. In addition to his parents, he was preceded in death by his brother, William Mania; and Allene and Clark Gayheart. In lieu of flowers, expressions of sympathy may be made to the American Lung Association and Franklin County Humane Society. Arrangements are under the direction of Harrod Brothers Funeral Home.

The family of Robert C Mania Jr created this Life Tributes page to make it easy to share your memories.