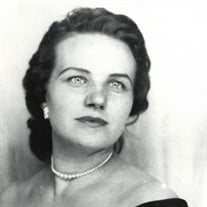 Frankfort – Ruby Daniel Sowers, beloved mother, grandmother, and sister passed away Wednesday, January 30, 2019 in Frankfort surrounded by her family. Services will be held at Harrod Brothers Funeral Home on Monday, February 4, 2019, at 1:00 p.m. with Rev. Everett Hawkins officiating. Burial will follow at Frankfort Cemetery. Visitation will be held at Harrod Brothers Funeral Home from 11:00 a.m. until 1:00 p.m. service time on Monday. Ruby was born in Frankfort on July 6, 1936, to Robert Lee Daniel and Crystal Pinkie Patrick Daniel. She shared a loving home with her husband, Ovie Ray Sowers, until his death in 1996. She was a devoted member of Faith Baptist Church serving as a Sunday school teacher and choir member. She loved gardening, spending time with her grandchildren, singing and sharing her love for God with those around her. She is survived by her children, Marvin Terry (Tammi), Daniel Terry (Audrey), Patricia Kelsey, and Nita Ritchey (Paul); grandchildren, Regina Long, Jennifer Ewell (Sylvester, Jr.), Crystal Brown, Wesley Harrod, and honorary grandchildren, Craig Phelps and Jared Miller; great-grandchildren, Ashley Taylor (Jacob), Arionna Ewell, Tyson Ewell, Conner Wethington, Nevaeh Wethington, Khloe Taylor and Adaley Taylor; sisters, Doris Howard, Ruth Jones (Robert), and Barbara Brewer. In addition to her parents and husband, she was also preceded in death by her son, John Terry, and siblings, Lawrence Daniel, Corrine Austin, Robert Daniel, Richard Daniel, David Daniel, and Linda Hunter. Serving as pallbearers will be Donald Brewer, Gary Daniel, Ronald Hockensmith, Keith Hunter, Jeff Daniel, and Mike Daniel. Honorary pallbearers will be the remainder of her nieces and nephews. The family would like to send a special thanks to the wonderful staff at Bradford Square Nursing Home, who not only cared for her, but showed her love and compassion during her stay. In lieu of flowers, expressions of sympathy may be made to Faith Baptist Church in Frankfort. Arrangements are under the direction of Harrod Brothers Funeral Home.

The family of Ruby Daniel Sowers created this Life Tributes page to make it easy to share your memories.