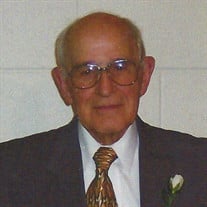 Frankfort – Stanley Wallace Salchli, age 98, passed away on Friday, December 11, 2020. Services will be held at Crestwood Baptist Church on Thursday, December 17, 2020, at 10:00 a.m. with Rev. Mike Butler officiating. Burial will follow at Frankfort Cemetery. The family will receive friends at Crestwood Baptist Church from 5:00 p.m. until 8:00 p.m. on Wednesday, December 16, 2020. Masonic Rites will be held with Open Lodge at 7:30 p.m. on Wednesday. Mr. Salchli was born in Frankfort on November 8, 1922, to the late John Fredrick and Elsie Snow Salchli. He was a graduate of Elkhorn High School and earned his Bachelor Degree from the University of Kentucky. He was a Veteran of the United States Army where he served as a Sergeant in the Battery B 233rd Anti-Aircraft Battalion during World War II. Mr. Salchli retired, after a long career as an investigator, from the Federal Bureau of Alcohol, Tobacco and Firearms - Department of the Treasury. Lovingly known as “Mr. Sunday School,” he served as the Sunday School Director at Crestwood Baptist Church for 42 years, the Franklin County Baptist Associational Sunday School Director for over 30 years, as well as on the Sunday School Board at Campbellsville University. He was a lifetime member of Crestwood Baptist Church where he served as a Trustee and Deacon for 70 years. In addition, he was elected to the Franklin County School Board for 6 years and was a life member of the Masonic Lodge Hiram No. 4. In his spare time, he truly enjoyed being outside playing golf, fishing, gardening and cooking for his family. He dedicated his life to being an American, Kentuckian, and Frankfortonian, and will forever be remembered as a Christian pillar for the growth and prosperity of his community. He is survived by his beloved and most adorned bride of 74 years, Mildred Agee Salchli; son, Stan A. Salchli (Teresa); grandchildren, Brad Taylor (Erica), Jason J. Taylor (Rebecca), Justin Taylor, Emeral Carrier, Stanley A. Salchli II, Savannah Salchli and Bill Brown (Jane). He was also blessed with 10 great-grandchildren and many nieces and nephews. In addition to his parents, he was preceded in death by his daughters, Deborah Jo Salchli Taylor and Phyllis Ann Salchli, and by his 8 siblings, Fred, Ed, Evelyn, Madeline, Maurice, Eugene, Elizabeth, and Charlie. Serving as pallbearers will be his grandchildren Brad, Jason, Justin, Stanley, Emeral, Savannah, including Brian Agee and John “Chip” Evins. Honorary Pallbearers will be James “Skip” Agee, Glenna Sue Smith and the Deacons of Crestwood Baptist Church. Live Streaming will be available on Thursday, December 17, 2020, after 10:00 a.m. via www.harrodbrothers.com/service-videos Arrangements are under the direction of Harrod Brothers Funeral Home & Crematory. Flowers welcome. Also, expressions of gratitude may be made to the Crestwood Baptist Church Sunday School department. Condolences may be shared via the online guestbook at www.harrodbrothers.com.

The family of Stanley W. Salchli created this Life Tributes page to make it easy to share your memories.