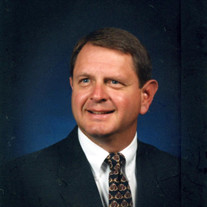 Thomas Watson Brawner, III, 74, of Georgetown, KY passed away on Sunday, August 15, 2021, at UK Chandler Medical Center. Services will be held at First United Methodist Church in Frankfort on Saturday, August 21, 2021, at 1:00 p.m. with Dr. Jack Brewer officiating. Interment will follow at Frankfort Cemetery. The family will receive friends at First United Methodist Church from 10:00 a.m. until 12:30 p.m. on Saturday. He was born in Frankfort, KY on October 12, 1946, to Thomas Watson Brawner, Jr. and Nell Donoho Brawner, and was a graduate of Franklin County High School, The Ohio State University, and the University of Kentucky. Tom Brawner was retired from 48 years in music education, teaching at Scott County High School, Frankfort High School, the University of Kentucky, Eastern Illinois University, and Franklin County High School. He loved playing golf and coaching summer baseball leagues in Frankfort. Tom conducted the Capitol City Community Band from 1992 to 2017, and worked extensively as a professional trumpet player in both the classical and jazz genres. Bands under his direction performed at the KMEA State Conference, the prestigious Midwest International Band and Orchestra Clinic, and Carnegie Hall, earning numerous Distinguished ratings at both state and national level assessments. Tom Brawner was the first recipient of the KMEA Secondary Instrumental Music Teacher of the Year, and is a member of the both the Scott County Athletics Hall of Fame and the Franklin County High School Hall of Fame, as well as the Phi Beta Mu International Bandmasters’ Fraternity Hall of Fame. Tom is survived by his wife of 26 years, Elaine Brawner; children Lindsay Brawner King (Brent) and Thomas Watson Brawner, IV (Erin); step-children Lesley Gardner Smith (Shane) and Jeremy Gardner (Jackie); grandchildren Elizabeth King, Audrey King, Evelyn King, Avery Brawner, and Rye Brawner; step-grandchildren Preston Smith, Pierson Smith, Alyx Gardner, and Kylan Gardner. Tom Brawner was a great musician and an avid sports fan who loved his family, his friends, his band family, and his dogs. He will be missed, but his influence continues throughout the state and the nation through those who knew and loved him. In lieu of flowers, expressions of sympathy may be made in Tom’s memory to a charity of one’s choice. Arrangements are under the direction of Harrod Brothers Funeral Home & Crematory.

The family of Thomas Watson Brawner III created this Life Tributes page to make it easy to share your memories.